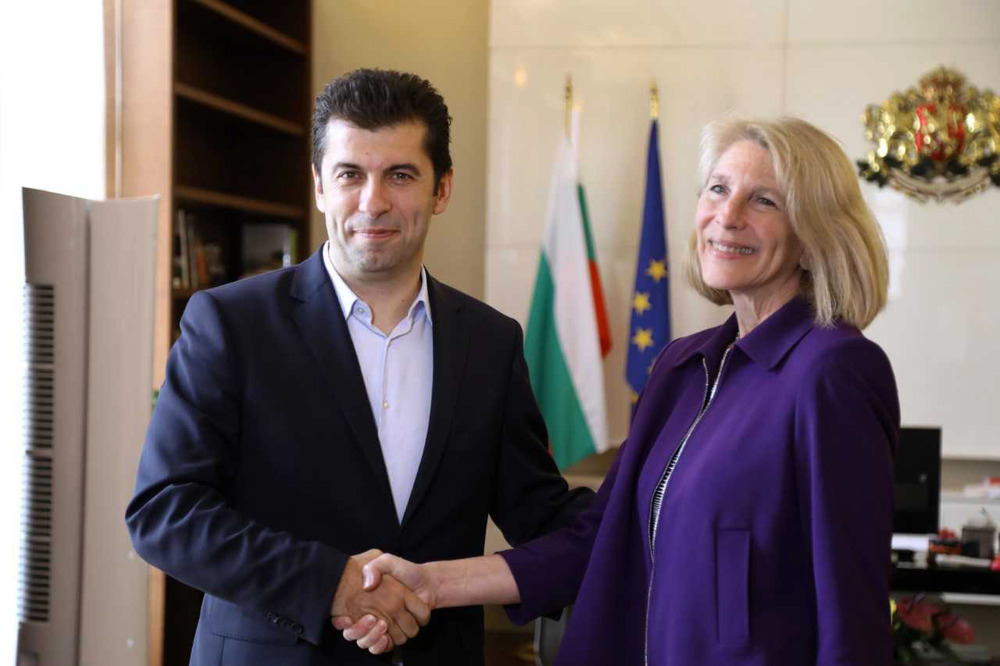 Bulgarian Prime Minister Kiril Petkov and President Rumen Radev conferred here on Wednesday with US Assistant Secretary of State for European and Eurasian Affairs Affairs Karen Donfried, who is visiting Sofia on May 18 and 19.

According to the Government Information Service, Petkov and Donfried discussed bilateral security cooperation, NATO's unified response to Russia's war in Ukraine, the common energy projects, and measures to cope with corruption.

The meeting between President Radev and Donfried focused on topics from the strategic bilateral partnership, matters of stability and security in the context of the war in Ukraine, as well as the EU enlargement policy, the head of State’s press secretariat reported.

Radev said that Russia’s war against Ukraine fundamentally changes the security environment not only in the region but also in Europe, and that requires rethinking and real actions within the EU and NATO to change the approaches to guaranteeing peace and security.

The Bulgarian President called for timely support by Bulgaria’s allies to prevent loss of defence capabilities of the Air Force until this country receives the eight F-16 fighter jets purchased from the US. “Guaranteeing our air sovereignty is extremely important not only for Bulgaria but also for our partners,” Radev noted.

In his words, Bulgaria is the country most interested in the faster launch of EU accession negotiations with the Republic of North Macedonia but expects clear and firm legally binding mechanisms and real steps for eradicating hate speech and systematic examples of discrimination of citizens with Bulgarian self-awareness. Of key importance for speeding up the country’s European path is the implementation of the Copenhagen criteria for EU membership, the achievement of sustainable and irreversible solutions for the development of bilateral ties, and the inclusion of the Macedonian Bulgarians in the constitution alongside the other parts of peoples as means to guarantee their rights. “There is broad consensus on this topic in Bulgarian society, confirmed by the National Assembly, and any backtrack threatens the stability in the EU Member State itself,” Radev stressed.

The US Department of State said on May 17 that Donfried is in Sofia "for a series of high-level meetings to reaffirm the strong bilateral partnership between the United States and Bulgaria." She was scheduled to meet with senior Bulgarian government officials and leaders of political parties, and discuss a range of key issues, "including our robust bilateral security cooperation, NATO's unified response to Russia's unprovoked war against Ukraine, the U.S. commitment to supporting Bulgaria's energy security and efforts to combat corruption, and other regional issues," according to the Department's statement.

"This is the latest in a series of high-level engagements between the United States and Bulgaria.  Most recently, Vice President Kamala Harris, Secretary of State Antony Blinken, White House National Security Advisor Jake Sullivan, and Department of State Under Secretary for Political Affairs Victoria Nuland met with Bulgarian Prime Minister Kirill Petkov during his May 9-10 visit to Washington, D.C.  Secretary of Defense Lloyd Austin visited Bulgaria in March, and State Department Counselor Derek Chollet visited Sofia in February.  Assistant Secretary Donfried's visit will build on these recent engagements and set the stage for the next meeting of the U.S.-Bulgaria bilateral strategic dialogue later this year," the Department of State said.

"Assistant Secretary Donfried will reaffirm our strong bilateral relationship on security, energy, prosperity, and democracy," the US Embassy in Sofia said on Facebook.