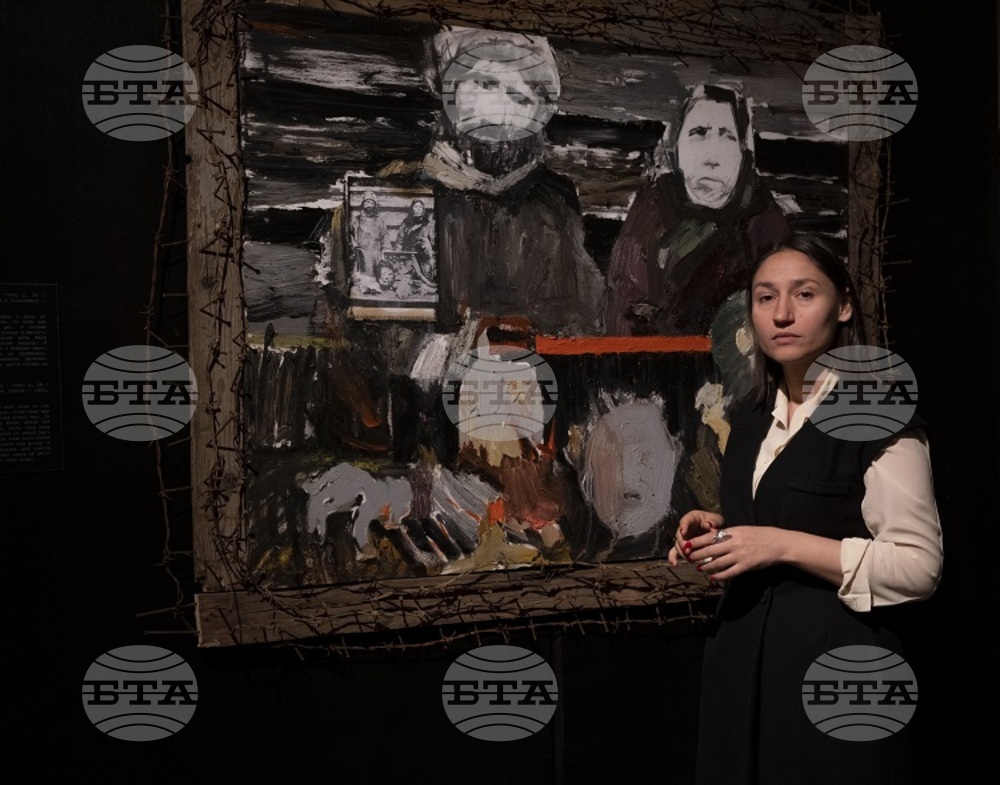 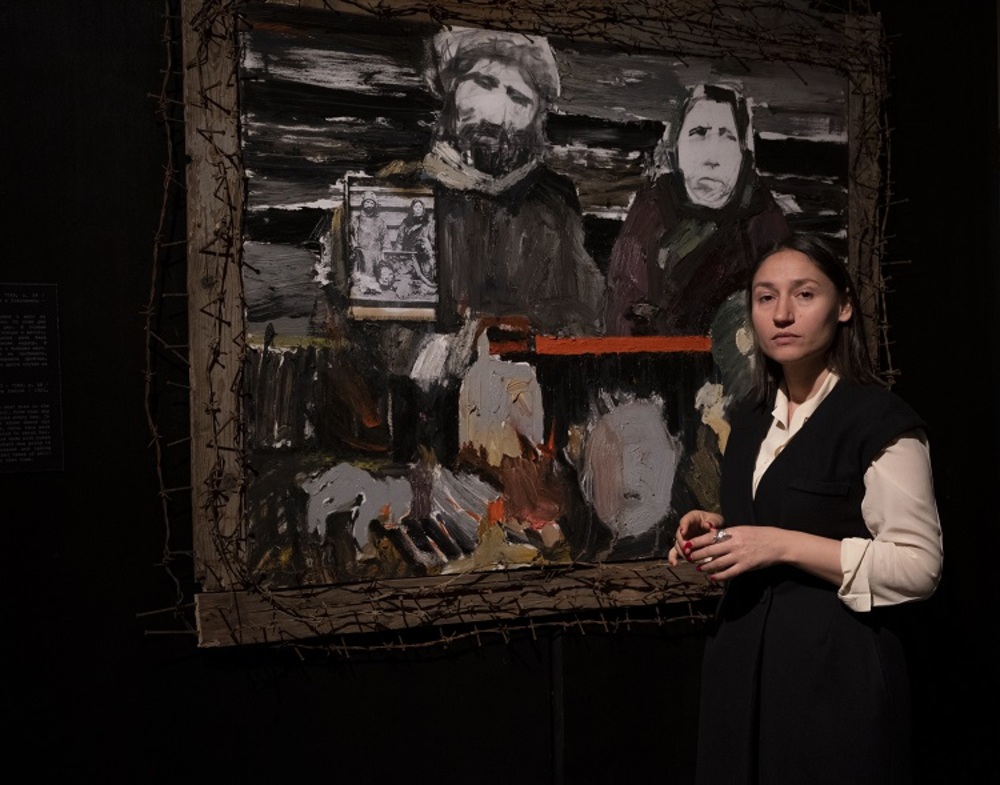 Yona Tukuser is a Bessarabian Bulgarian. She was born in the Bulgarian-populated village of Glavan in Ukraine, from where, as she herself says, "she draws energy, strength and themes for her art". From 2003-2007 she studied at the Izmail State University of Humanities in Ukraine, graduating in Fine Arts, in the class of Ivan Shishman. Then, in the period 2007-2010, she studied painting at the National Academy of Arts in Sofia.

Since 2009, Yona has been researching historical materials about the famine in Ukraine and the Soviet Union from the period 1921-1923, 1932-1933, 1946-1947, using an academic approach to selecting sources of information from archives and personal interviews with living witnesses who survived the tragedy. The results of the research on the subject serve to recreate the Soviet famine in Ukraine through the means of painting.

Her first exhibition "Hunger" was presented in March 2011 in Sofia.

"In this project, Yona Tukuser, who works in the metamodernism style, interprets in her paintings the tragic consequences of the famine in the 20th century and glances with concern towards the present in the context of Russia's war against Ukraine," Martina Yordanova, the exhibition's curator, writes about her.

The National Gallery in Sofia closed the exhibition by Yona Tukuser on 27 November - the day on which the memory of those who perished in the Holodomor was commemorated in Ukraine. On the same day, the Sofia City Art Gallery bought a canvas from the exhibition, which, according to the artist, is the reason why she started this project.

Another work of hers, "Bessarabia", was donated by Yona to the National Gallery. It is written on the painting that "on the territory of Ukraine there are two large Bulgarian communities - in Bessarabia and Tavria. During the two Famines of 1921-1923 and 1932-1933, 30,000 people died among the Bulgarians in Tavria. Until the beginning of World War II, the Bulgarians in Bessarabia were within the borders of Romania. In the winter of 1946-1947, the Stalinist government organized a Holodomor in Bessarabia as well, in which over 70,000 ethnic Bulgarians died. In total, about 100,000 Bessarabian and Tavrian Bulgarians died in the three Stalinist Holodomors, which was one third of their number."

Q: Yona, as an artist, you introduced your big project "Hunger" to the viewers. What are the stages of its preparation and its implementation?

I have been developing the Hunger project for 13 years. Even as a student at the National Academy of Art in Sofia, I was already thinking about the subject of hunger in Ukraine. I started reading archival documents about the famine - about the post-war famine in 1946-1947, the Famine in 1932-1933 and the first famine in 1921-1922 in the Volga region. I researched these materials back in 2009 and when I graduated in 2010, I immediately started making the first sketches. And at the beginning of 2011 I showed the first exhibition "Hunger" in Sofia. My focus was on the Bessarabian Bulgarians - the famine after the Second World War in 1946-1947. I went to live in New York in 2012 and returned to Sofia two years later, as I was invited to present the "Hunger" exhibition at the UN headquarters in New York.

I returned to Bulgaria to continue painting on the subject and to research new archival sources. Prior to that, I used research articles, ready information by historians from their point of view. But since 2013, I have begun to search for unpublished sources and archival documents. I looked for stories interesting to me, as an artist. Because scholarly publications present statistical information that lacks emotion. That information was insufficient for me. I was looking for the details of the tragedy of a person, of a family, and such stories are not published in books and publications. I worked for a long time with archives in Sofia, Dobrich, Bucharest, Izmail and Odessa. I researched these stories for a while, until 2018. And then I started doing video interviews.

Prompted by missing information in official prosecution documents confirming the presence of cannibalism in Bessarabia (Ukraine) in the period 1946-1947, I undertook research through an alternative source of historical information - oral history. I conducted interviews in front of a video camera with 86 people from twelve Bulgarian settlements in Ukraine. Turning to the living collective memory of local residents, I recorded the shared memories of the existence of cannibalism in their villages.

They told me on camera how collective farms came about after the war. About the Soviet government’s policy to tax meat, wool, eggs, milk and other foods. One old woman told me that she couldn't get married until she paid a tax of 300 kg of meat. She had to get permission from the town hall to get married. And she was a young girl. Apart from the tax in the form of food, there were also squads of Komsomol members from the town hall going around houses to seize food from the population and force them to join the collective farm because nobody wanted to do so on their own free will. Those who disobeyed starved to death.

As far as the Bessarabian Bulgarians are concerned, over 100 thousand of them died during the famine. This is data from research. I have also done statistics, I have spoken to many village mayors, in some villages 50-70 percent of the population perished. The Bulgarians themselves said that the famine was not such a great tragedy in all villages. A lot depended on the village leaders, who protected their fellow villagers, tried to help them, warned them that grain would be seized, etc.

For example, in the villages of Bolgrad district - Orikhivka [also known as Pandakli] and Vinogradne [Sambatar] it was terrible. When I talked to elderly people in Sambatar, I heard such terrible things, that even I as an artist, could not come up with such paintings. To accompany the exhibition "Hunger" I made the documentary "ANTHROPOPHAG" with the interviews of the elderly people of Bessarabia, which can also be seen on YouTube.

During the interviews one grandmother said to me "It was so scary, I wish you never experience it and never even hear about this horror". Little is known about this because those people who went through these horrors did not with to talk about it. The psychological trauma was so strong with them that they tried to forget about the famine. And that's why it's not common to talk about it, because the people themselves want it to be forgotten and the next generations don't know about this tragedy.

Q: What is the main appeal that you, as an artist, make to the viewer?

My message is that tragedy should unite us, not serve as an enmity between people. For the Hunger project I included two paintings made at the beginning of the war in Ukraine. They are the central part of the exhibition. I painted the paintings after February 24 in Sofia at the Nu Boyana Film Studios, where the CEO, Yariv Lerner, gave me the opportunity to continue painting on the Hunger project exhibition for free. Last summer I returned to my home village of Glavan to finish this project. I turned the large barn at home into a studio and prepared 80 large canvases to make paintings based on the subjects of the collected stories from the video interviews. After the war started my creative process was interrupted and I returned to Sofia in early March. Then Lerner gave me a studio and helped me bring the canvases to Sofia.

These two central paintings deal with the famine of 1946-1947 in Bessarabia and the current war in Ukraine. One of the paintings is from the past, it's 4 meters big. It is a story about a boy from my village of Glavan, which happened in 1946. This Bulgarian boy's parents died of starvation. The other one is about the current war in Ukraine, in the town of Mariupol. The story is about a boy named Iliya, who is six years old. I heard his story in the Ukrainian media. His parents died in the war and he spent three weeks in a bomb shelter. He said he was so hungry that he started eating his friend's toy. I created this canvas based on this vivid story that repeats itself. This is the story of the Bulgarian child from the famine 75 years ago and the Ukrainian child from Mariupol now. With these two paintings I want to show how tragedy unites us.

Q: This topic is very substantial and heavy. Where does your interest in it come from?

I have a memory of when, as a student in the 5th grade, our history teacher showed us a picture of the famine in the USSR and Ukraine. He showed us a picture of cannibals from the Volga region from 1921-1922. I was so shocked that it was imprinted in my mind for life. He gave us homework to ask our grandparents about how they survived the famine of 1946-1947 and write their story for homework. All of us in the class then heard about the famine for the first time. The shock I experienced as a child from that photo provoked me to revisit this topic as a student. I told my colleagues from the art academy about the famine and it turned out that they did not know about the history of the Bessarabian Bulgarians, that they had experienced the tragedy of mass starvation. This prompted me to recreate history in paintings to show what our ancestors went through.

Q: What other themes are present in your work?

In parallel, I am working on several other new projects. This is a series of paintings related to my birthplace in Bessarabia. One project is called "Root", the other "Time". But they are all connected with the land where I was born. It's a Bulgarian theme. I present the life and lifestyle of the Bulgarian in Bessarabia. In the "Time" project, each picture corresponds to one second, a still from video footage shot in the period from 1994 to 2012 in my native house. Through the prism of my family, I am preparing a series of 130 paintings that I started in 2015. In them, I present my family from video footage about the everyday life of a Bulgarian in a village in Bessarabia - the field, the land, making cheese. Each picture is a frame from the video. It is one second of my life. 130 pictures. 130 frames. 130 seconds of my life. This project is scientific and artistic. I consult with specialists, physicists. It's a philosophical look on a quantum level. The painting for me is not an end in itself to illustrate the life of a Bulgarian in a village in Bessarabia, I use it as a model to "illustrate" through the medium of painting my concept of an artist's idea of time. The project "Time" is not finished yet, 70 paintings are already finished, while the others are started but not finished.

Q: Ancestral memory plays a great role in the future of man. What is Bulgaria for you and why did you choose to make a career here?

For me Bulgaria is my homeland, even though I was born in Bessarabia, Ukraine. The feeling of homeland is Bulgaria. This is on a subconscious level. Realizing that Bulgaria is the cradle of an ancient civilization gives me strength and self-confidence as a contemporary artist, turning to history and art. I am inspired by the past. For me it is on a subconscious level, I don't flaunt the Bulgarian, but rather feel admiration.